Citizens for Sustainability asked the 2020 mayoral and city council candidates six questions about their ideas for advancing sustainability within St. Anthony. Their responses will be posted as they are received.

1. What does Sustainability mean to you (as it pertains to St. Anthony)?

At its base, sustainability is essentially about the necessary and sufficient conditions for surviving into the future. Sustainability is a duty we humans have and is not, therefore, a responsibility for other forms of life on earth.

Now what survives into the future specifically would be (1) humans, (2) the earth and her natural resources, and (3) other forms of life on earth. The standard way of talking about sustainability has been to shift the emphasis and concern about “survival” to humans and, consequently, to the impact the survival of humans has on other forms of life and earth herself. This standard way of talking focuses on the following three divisions of sustainability:

Social sustainability: ensuring that the physical, political, educational, and psychological well-being of humans is secured without (1) compromising the same well-being of future human generations, (2) compromising the survival of other forms of life, or (3) depleting earth resources or earth’s life sustaining conditions (e.g., healthy climate conditions with controlled CO2 levels.

Economic sustainability: controlling expenditures and increasing or maintaining revenue and the production of finished goods and services so that humans can survive into the future without compromising the financial wellbeing of future human societies, without compromising the survival of other forms of life or the depletion of earth resources or earth’s life sustaining conditions (e.g., healthy climate conditions with controlled CO2 levels.)

Environmental sustainability: this is essentially a matter of (1) ensuring that current natural resources or non-human life forms are used in such a way that they are not over used/depleted for future use or (2) ensuring that the byproducts we make natural resources do not detrimentally affect or harm currently existing life and consequently jeopardize the possibility of a future eco-system for human and non-human life.

While a person can be concerned about and do work in any one of these three sectors, at the exclusion of the other two, the person would fall short of manifesting justice. From what I see on CFS website, its focus is foundationally environmental. Pace CFS, sustainability rooted in justice is focused on both the rights of human and the duties to non-human animals (that exist in present and future communities).

2. What initiatives in the city’s Comprehensive Plan would you prioritize to create greater resilience and sustainability?
3. How would you build on recent additions in the Parks & Environmental Commission duties to advance environmental goals in the Comprehensive Plan?
4. What “win-win” opportunities do you see in supporting existing and future sustainability initiatives?

First of all, I am still learning a lot about sustainability. I see the city with the help of CFS are already doing a lot. So this means I am open to being influenced on these matters. I am pro-sustainability, but I am still gaining on-the-ground knowledge of the cities projects, commitments and opportunities.

I would prioritize reducing facility emissions and city-wide emissions. I would also support converting government vehicles to electric, (which will call for more electricity, but which will save money on fuel). Perhaps the SAVPD could convert its cars to electric or hybrid. Various small maintenance vehicles can most easily be converted, which may have already been done. Plug-in hybrids might be appropriate for some larger vehicles.

St. Anthony has a deal with a couple of solar farms to get enough power to supply 25% of government building usage. That leaves the other 75% to come from the regular Xcel power grid. However, Xcel has programs where St. Anthony could sign up to pay slightly extra to have solar or wind power contributed to the grid in its name, in proportion to its power usage. In this sense, St Anthony would virtually be getting its electricity from the wind/solar source (even though it is all in one non-separable grid system). So I am suggesting that the SAV could sign up for this for its government buildings.

I would also look into subsidizing home visits by power companies and third parties to assess and assist with heating efficiency. They can check for insulation quality, window leaks, furnace efficiency and the like, and the city can help people get this assistance with an on-going program. Ultimately, our homes need to be heated by electric systems, and maybe the city can help speed that up.

I support a zoning change for ADUs. People who may have once needed a large home–e.g. parents whose children have moved out–can move into the ADU and rent out the main home. This is great for creating a secondary rental income and thus allows older residents to sustain residency in their current home.

To sustain existing persons of color and to social sustain their well-being, we could recruit new non-traditional businesses, e.g., a food coop, ethnic restaurants and ethnic grocery.

Finally I love non-human animals and would push to establish a dog park. Yes a dog park. A dog park allows us to convene together for our social well-being as we share stories about our dogs. I would include the requirement for a permit for non-residents to use the park to generate small money for SAV.

5. What would you do to address residents’ concerns about pedestrian and bicycle safety and increase access to metro bikeways?

I would look for good candidate streets to add sidewalks where there is none. I would also look for more key places to add crosswalks with the flashing lights you can turn on with a button and maybe there needs to be a couple more stop lights on silver lake road, which might have heavy reliance on pedestrians pushing the button, to keep traffic moving when no one is there waiting.

6. What are steps you would support to expand on the success of St. Anthony’s organics drop-off collection?

I obviously support curb-side organics pick-up, which could be combined with yard waste. Maybe people have to pay an extra $5-10 per month for this, on an opt-in basis, but offering the service seems like a good deal. 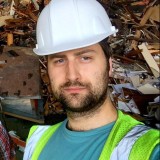 Dan Kunitz is a Minnesota native interested in decarbonization. He is a business analyst at the University of Minnesota and volunteers his website and design skills to Citizens for Sustainability.